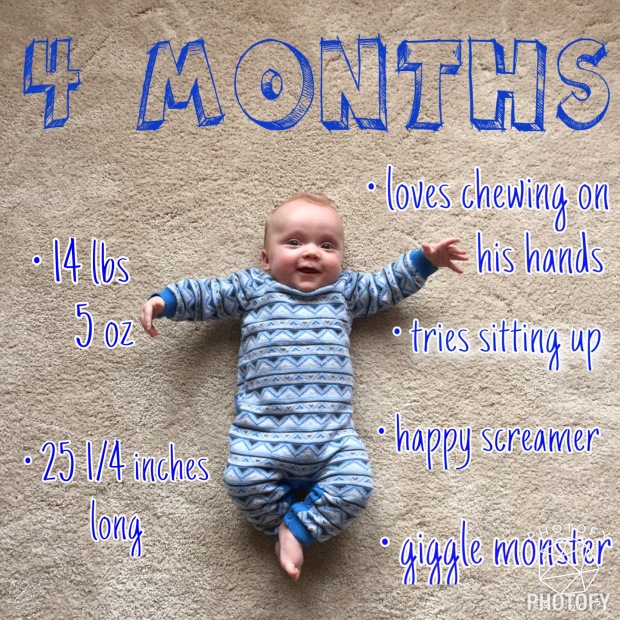 A little late on this blog but Brady turned 4 months old on the 29th of January. He had his 4 month appointment last week Tuesday and took his shots like a champ. One thing that I do like about our current pediatrician versus our old one is that when it’s time for his shots, two nurses come in the room and each nurse gives him one shot at the same time opposed to doing one leg at a time. He cried for a couple seconds and then I picked him up and he settled down. He is in the 23% for weight, 50% for length and 86% for head. Makenzie was the exact same way, low in weight and had a big ol’ head. He loves to laugh, watch his sister, play under his play mat, chew on his toys, suck on his fingers, and recently started rolling back to belly. He responds to his name and pushes me away when he is full and done eating. He tries to put my hand in his mouth and is slowly starting to transfer toys from one hand to the other. I don’t see any swollen gums yet so I don’t believe he is starting to teeth, just drool. He’s adding new vocabulary to his little language and I can hear him start to try to say his D’s. Naturally, Dada always seems to come before Mama.

Remember last month when I ended my post about Wonder Week 4 and the 4 Month Sleep Regression and how I was nervous for what was to come… Well, overall leap 4 went really well for us. Many parents report babies sleeping terribly for the entire 5 weeks that it lasts and here I thought we got off the hook from it but now I am not so sure. Brady started rolling from back to belly over the weekend so when he is lying on his back, whether he is sleeping or awake he is constantly practicing. We also told the pediatrician we are still swaddling him so he told us we need to drop that as well. We had zero trouble transitioning Makenzie, mostly because her daycare did it for us starting with naps. Brady I think may be a different story, that kid has some serious stubbornness to him from what I can see already.

Coincidentally enough, during his 4 month well check his pediatrician asked if he had been coughing at all or relatively healthy. I told him he had been healthy. Fast forward 6 hours and I kid you not, his cough started. He went to daycare on Wednesday; he was generally happy but still coughing. Thursday was the same and when I picked him up I noticed he had started wheezing. I made an appointment for Friday and sure enough, when he was seen his ped said he had bronchiolitis. His ped walked into the room and immediately said to the nurse, “He needs a breathing treatment.” His poor rib cage was retracting from working so hard to breathe and his O2 sats were at 94%. He got his nebulizer treatment and did ok. He wasn’t a huge fan of the mask being smooshed against his face but who would be. His ped wanted to see him the very next morning to make sure he looked and sounded ok. I brought him back Saturday morning and his ped said he was moving air much better than last night even. He told us to continue the neb treatments for when he was having a tough time breathing, to give him Tylenol if he seemed uncomfortable, use a cold mist humidifier, and to suction, suction, suction the heck out of him since he was draining so much mucous. Thank goodness for the Nose Frida! 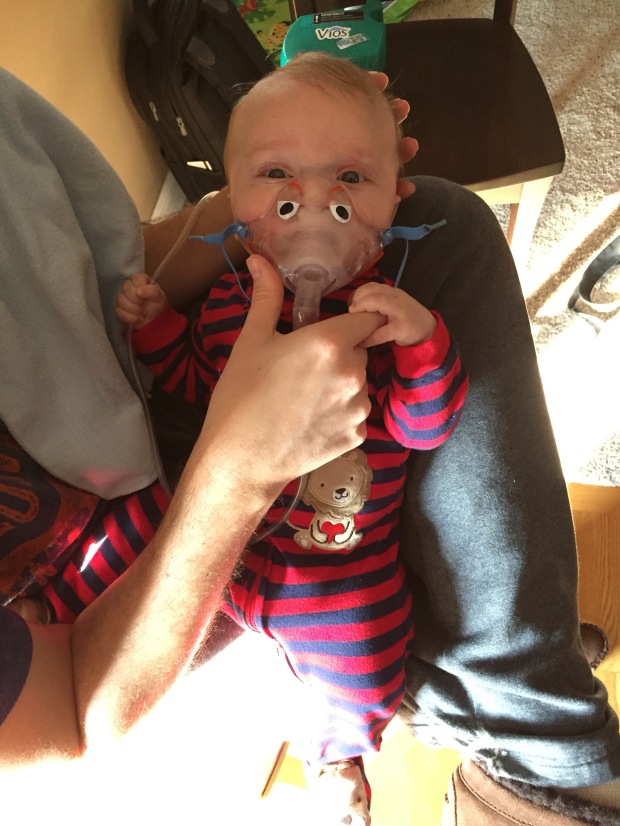 For as hard as he was coughing and for as miserable as he seemed, he slept pretty decent all last week, only waking once at night to eat which isn’t like him. I figured his throat probably was hurting and let him nurse for however long he wanted. Then Saturday night came along, and Sunday, and Monday, and Tuesday night and our once magnificent sleeper disappeared. Poof! He gone.

He woke up like 18,000 times between Saturday and Tuesday. Tuesday morning I took him back to the pedi because they wanted to see him again and they determined he now had an ear infection. Last night he slept elevated (which he has been doing since December) in his crib from 7p-8:45p and then he woke up screaming. Brian got him back to sleep and he slept until 10:30 and then he woke up screaming again. Brian took the first shift so I could get some sleep and he said he could not be put down at all. He would be legit sleeping on his shoulder and the second he would lay him down he would wake up and scream. Not just fuss but all out screaming. So, Brian spent from 10:30p-3a walking with him, rocking him, and holding him on his shoulder which is the only way he would sleep. At 3a, Brian came into the guest bedroom and gave me the monitor so I could take over. I was sleeping in the guest bedroom so I could get some uninterrupted sleep without having to hear him crying on the monitor. Not sure about any of you but that feeling of anxiousness, not knowing what the night will bring or if anyone in your house, aside from Makenzie, will actually sleep can be tough to handle. Once my shift started, Brady slept from 3a-3:45a and again woke up screaming. I went in there and nursed him. He ate until 4:15a and he fell asleep eating so I transferred him to his crib. About 3 minutes later he woke up, very unhappy, and squirming around, “yelling at me” so to speak for setting him down. I gave him Tylenol at that time because he was just so uncomfortable. He and I walked, rocked, bounced and I sang him the “Brady, please close your eyes and go to sleep” song, it’s an original. He finally gave up at 5:15a and fell asleep with me holding him upright while rocking. At that point, I put him back in his crib and crawled back into bed in the guest room, anxiously awaiting a noise from the monitor. At 6:15a I heard Makenzie trying to open the doors to our master bedroom so I flew out of bed and grabbed her before she would wake up Brian. She needed to go potty so I took her to the bathroom and tried to cuddle with her in the guest room for a bit but she decided she was hungry. I took her downstairs to eat and around 7:15a Brady woke up crying. He got his first dose of amoxicillin last night and got another one this morning. Most people say that you should see improvement anywhere from 24-48 hours so here is hoping that ear infection isn’t bothering him so much and he starts sleeping. Not just for the benefit of Brian and I, but for him as well, he has to be just so exhausted. I’m trying not to feel like a bad mom but I hope he goes back to sleeping the way he was before. I know right now we are in “survival mode” and just need to do whatever we can to get him to sleep but I really hope we aren’t creating bad habits for when he is healthy. I guess there isn’t anything we can do about that right now since he is in obvious discomfort from his ear.

My family and close friends all know, I am a crazy person when it comes to sleep, schedules, routines, etc. I like for my babies to sleep because I like sleep! Sleep deprivation is tough but one thing that has been great through this entire thing is the fact that I have a partner I can rely on when I need to tag out for a bit. Brian will jump up at the second I ask him and take over. He really is the best and I don’t know what I would do without him. I think we make a pretty damn good team. We still can find humor during the day about how the night before and we just laugh about it even if we feel like crying at night. We know that this won’t last forever but when you’re in the thick of it, the days go by fast and the nights can drag on and on. One week can seem like an eternity. I sit on my phone in the dark nursery, trying to stay awake while rocking him and I do so by Googling, 4 month sleep regression, or ear infections or reading baby sleep sites. Makenzie was an odd ball in that she just slept. She slept if she had an ear infection, she slept the moment we laid her in her crib around 4 months old and didn’t need much intervention in helping to get to sleep. I can remember one time when she was 6 months old and she had pneumonia that she slept on my chest because it was the only way she felt better. I know every baby is different and they are sure spot on about that. What may have worked for one, won’t always work for the other. Now, I am rambling. If you find yourself awake in the wee early morning hours with your fussy baby, just know you are not alone and Brian or I will probably be doing the same thing again tonight.

Someone please, please, please send some sleepy dust our way tonight, specifically for Brady. Hopefully when I find time for my next post, I will be able to say that as his ear infection improved and so did his sleeping

One thought on “Happy 4 Months! You get bronchiolitis and your first ear infection…” 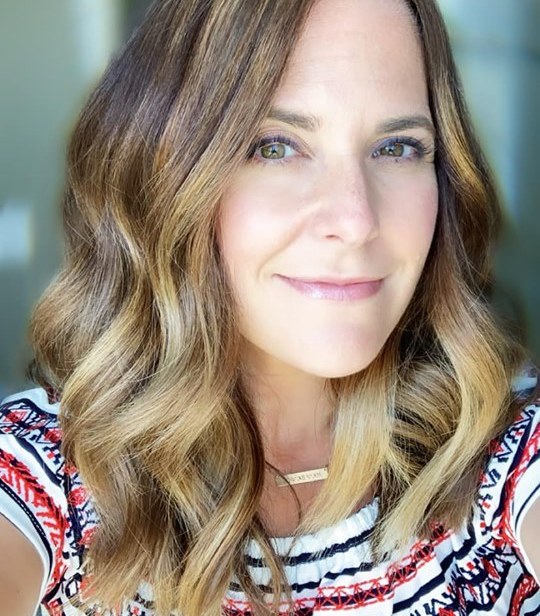